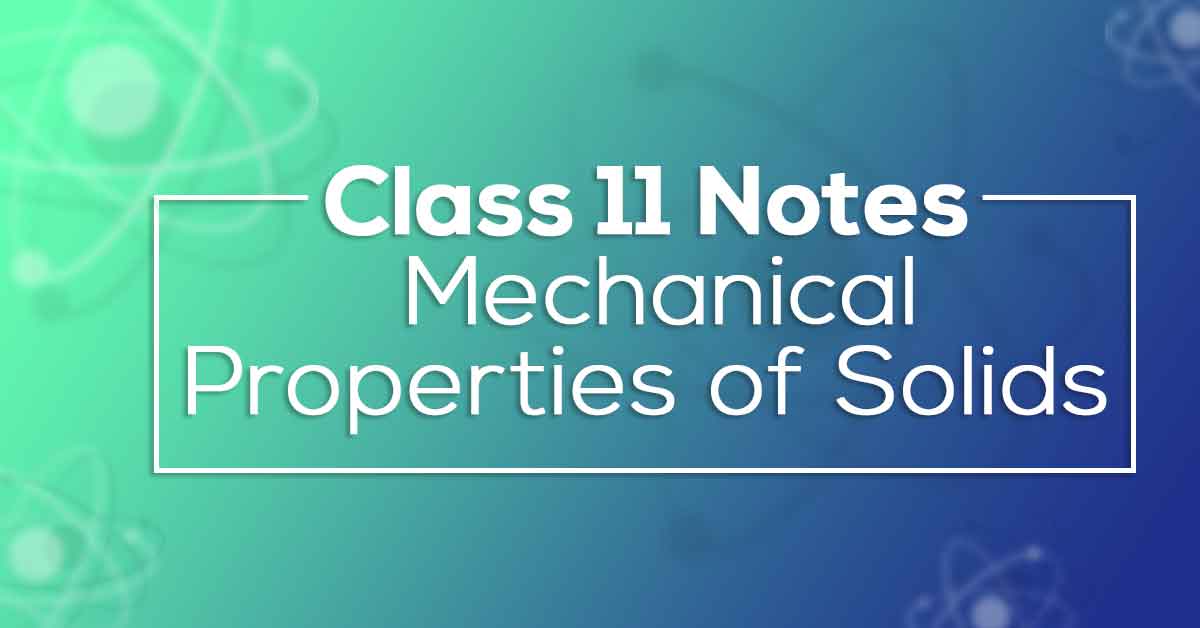 A force which produces a change in configuration of the object on applying it, is called a deforming force.

Elasticity is that property of the object by virtue of which it regain its original configuration after the removal of the deforming force.

Those bodies which regain its original configuration immediately and completely after the removal of deforming force are called perfectly elastic bodies. e.g., quartz and phosphor bronze etc.

Those bodies which does not regain its original configuration at all on the removal of deforming force are called perfectly plastic bodies, e.g., putty, paraffin, wax etc.
Stress The internal restoring force acting per unit area of a deformed body is called stress.
Stress = Restoring force / Area
Its unit is N/m2 or Pascal and dimensional formula is [ML-12T-2].
Stress is a tensor quantity.

Stress is of Two Types

Within the limit of elasticity, the stress is proportional to the strain.
Stress &infi; Strain
or Stress = E * Strain
where, E is the modulus of elasticity of the material of the body.

Types of Modulus of Elasticity

The maximum value of deforming force for which elasticity is present in the body is called its limit of elasticity.

The time delay in restoring the original configuration after removal of deforming force is called elastic relaxation time.
For quartz and phosphor bronze this time is negligible.

The temporary delay in regaining the original configuration by the elastic body after the
removal of deforming force, is called elastic after effect.

The property of an elastic body by virtue of which its behaviour becomes less elastic under the action of repeated alternating deforming force is called elastic fatigue.

The materials for which strain produced is much larger than the stress applied, with in the limit of elasticity are called elastomers, e.g., rubber, the elastic tissue of aorta, the large vessel carrying blood from heart. etc.
Elastomers have no plastic range.
Elastic Potential Energy in a Stretched Wire
The work done in stretching a wire is stored in form of potential energy of the wire.
Potential energy U = Average force * Increase in length
= 1 / 2 FΔl
= 1 / 2 Stress * Strain * Volume of the wire
Elastic potential energy per unit volume
U = 1 / 2 * Stress * Strain
= 1 / 2 (Young’s modulus) * (Strain)2
Elastic potential energy of a stretched spring = 1 / 2 kx2
where, k = Force constant of spring and x = Change in length.

When temperature of a rod fixed at its both ends is changed, then the produced stress is called thermal stress.
Thermal stress = F / A = yαΔθ
where, α = coefficient of linear expansion of the material of the rod.
When temperature of a gas enclosed in a vessel is changed, then the thermal stress produced is equal to change in pressure (Δp)of the gas.
Thermal stress = Δ p = Ky Δ θ
where, K = bulk modulus of elasticity and
γ = coefficient of cubical expansion of the gas.
Interatomic force constant
K = Yro
where, ro. = interatomic distance.

When a deforming force is applied at the free end of a suspended wire of length 1 and radius R, then its length increases by dl but its radius decreases by dR.

Now two types of strains are produced by a single force.

A beam clamped at one end and loaded at free end is called a cantilever. Depression at the free end of a cantilever is given by
δ = wl3 / 3YIG

where, w = load, 1 = length of the cantilever,
y = Young’s modulus of elasticity, and IG = geometrical moment of inertia.
For a beam of rectangular cross-section having breadth b and thickness d.
IG = bd3 / 12
For a beam of circular cross-section area having radius r,
IG = π r4 / 4
Beam Supported at Two Ends and Loaded at the Middle

Depression at middle δ = wl3 / 48YIG
Torsion of a Cylinder