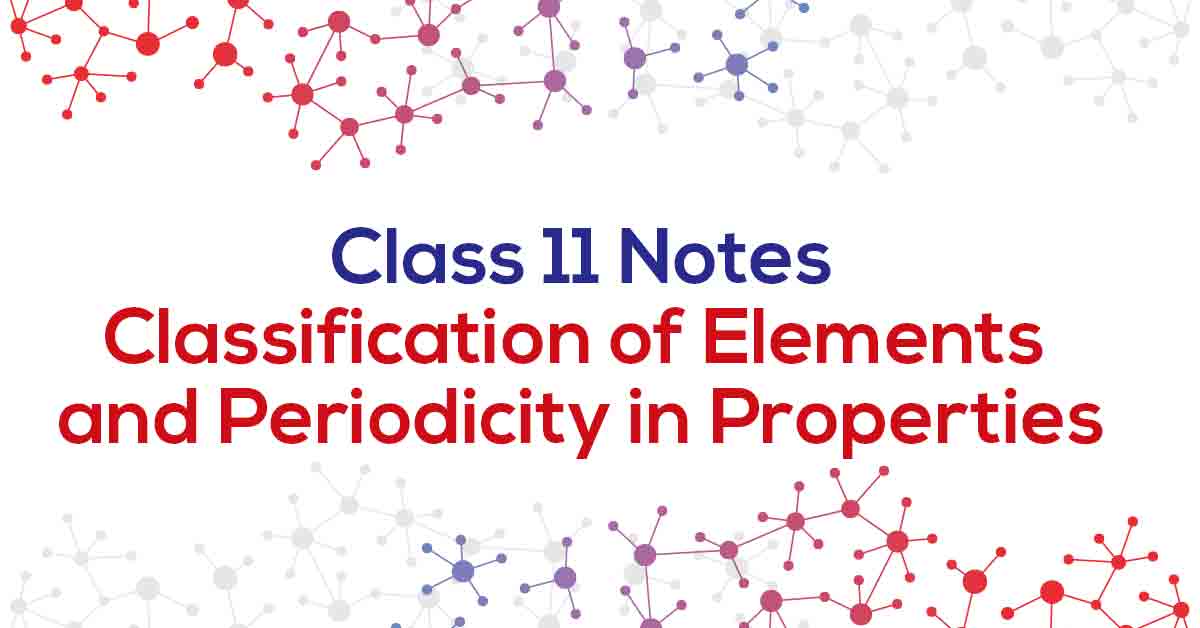 Classification of Elements
With the discovery of a large number of elements, it became difficult to study the elements individually, so classification of elements was done to make the study easier.
Earlier Attempts to Classify Elements
Many attempts were made to classify the known elements from time to time. The earlier attempts are as follows:
Prout’s Hypothesis (1815)
According to this theory, hydrogen atom was considered as the fundamental unit from which all other atoms were made. It is also known as unitary theory.
Dobereiner’s Triads (1829)
Dobereiner classified the elements into groups of three elements with similar properties in such a manner so that the atomic weight of the middle element was the arithmetic mean of the other two, e.g.,
Mean of atomic masses = (7 + 39) / 2 = 23
Similarly CI, Br, I; Ca, Sr, Ba are two more examples of such triads.
Limitations Dobereiner could not arrange all the elements known at that time into triads. He could identify only three such triads that have been mentioned.
Newland’s Octaves (1864) (Law of Octaves
Newland states that when elements are arranged in order of increasing atomic masses, every eighth element has properties similar to the first just like in the musical note [Every eighth musical note 1S the same as the first mentioned note]. This can be illustrated as given below
Limitations
1. This classification was successful up to the element calcium.
2. When noble gas elements were discovered at a later stage, their inclusion in these octaves disturbed the entire arrangement.
Lother Meyer’s Atomic Volume Curve (1869)
Meyer presented the classification of elements in the form of a curve between atomic volume and atomic masses and state that the properties of the elements are the periodic functions of their atomic volumes.
[Here, atomic volume = molecular mass / density
He concluded that the elements with similar properties occupy similar position in the curve.
Mendeleef’s Periodic Table
Mendeleefs Periodic Table is based upon Mendeleefs periodic law which states ‘The physical and chemical properties of the elements are a periodic function of their atomic masses.”
At the time of Mendeleef, only 63 elements were known.
This Periodic Table is divided into seven horizontal rows (periods) and eight vertical columns (groups). Zero group was added later on in the modified Mendeleefs Periodic Table.
Importance of Mendeleers Periodic Table
Few important achievements of Periodic Table are
1 Systematic study of the elements.
2. Prediction of new elements and their properties. he left space for the elements yet to be discovered. e.g., he left spaces for Ga and Ge and named these elements as ERa-aluminium (Ga) and EKa-silicon (Ge) respectively
3. Atomic mass correction of doubtful elements on the basis of their expected positions and properties.
Modified Form of Mendeleef’s Periodic Table 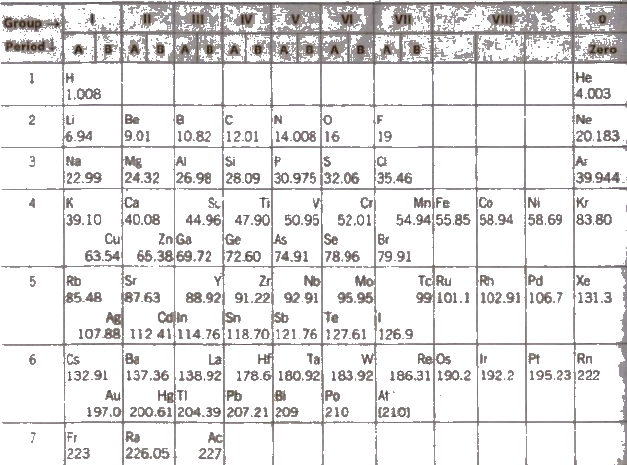 Defects in the Mendeleef’s Periodic Table
(i) Position of hydrogen Hydrogen has been placed in group IA (alkali metals). but it also resembles with halogens of group VIlA. Thus. its position in the Mendeleef’s Periodic Table is controversial.
(ii) Position of isotopes As Mendeleef’s classification is based on atomic weight, Isotopes would have to be placed in different positions due to therr different atomic weights, e.g., 1H1 2H1 3H1 would occupy different positions.
(iii) Anomalous positions of some elements Without any proper justification. in some cases the element with higher atomic mass precedes the element with lower atomic mass. For example, AI (atomic weight = 39.9) precedes K (atomic weight = 39.1) and similarly Co (atomic weight. = 58.9) has been placed ahead of Ni (atomic weight = 58.7).
(iv) Position of Lanthanoids and actinoids Lanthanoids and actinoids were not placed in the main Periodic Table.
Modern Periodic Table (1913)
Moseley modified Mendeleefs periodic law. He stated “Physical and chemical properties of elements are the periodic function of their atomic numbers.” It is known as modern periodic law and considered as the basis of Modern Periodic Table.
When the elements were arranged in increasing order of atomic numbers, it was observed that the properties of elements were repeated after certain regular intervals 01 2, 8, 8, 18, 18 and 32. These numbers are called magic numbers and cause of periodicity in properties due to repetition of similar electronic configuration.
Structural Features of Long Form of Periodic Table
1. Long form of Periodic Table is called Bohr’s Periodic Table. There arc 18 groups and seven periods in this Periodic Table
2. The horizontal rows are called periods.
3. The 18 vertical columns are known as groups.
Anomalous behaviour of the first element of a group. The first element of a group differs considerably from its congeners (i.e., the rest of the elements of its group).
This is due to (i) small size (ii) high electronegativity and (iii) non availability of d·orbitals for bonding. Anomalous behaviour is observed among the second row elements (i.e., Li to F).
4. The Periodic Table is divided into foul’ main blocks (s, p, d and n depending upon the subshell to which the valence electron enters into.
(a) s-block elements Ist and IInd group elements belong to this block and the last electron enters in s-subshell.
General electronic configuration is ns1 – 2
(b) p-block elements Group 13th to 18th belong to this block in which last electron enters in p-orbital.
General electronic configuration is ns2 np1 – 6
This is the only block which contains metal, non-metal and metalloids. Examples of metalloids are B, SI Ge, As, Sb, Te and At.
The elements of s-and p-block elements are collectively called representative elements.
(c) d-block elements Group 3rd to 12th belong to this block, in which last electron enters in d-orbit.
They have inner incomplete shell. so known as transition elements.
General electronic configuration is ns1 – 2 (n – 1)d1 – 10
d-block elements are generally coloured, paramagnetic and exhibit variable valency.
(d) f-block elements They constitute two series 4f (lanthanoids) and 5f (actinides) in which last electron is in 4f and 5f subshell respectively.
General electronic configuration
(n – 2) f1 – 14(n – 1) d0 – 1 ns2
The f-block elements are also called as inner-transition elements.
(Elements with atomic number greater than 92 (U92) are called the transuranium elements. All these elements are man-made through artificial nuclear reactions.
Very recently. on August 16, 2003, IUPAC approved the name for the element of atomic number 110, as Darmstadtium, with symbol Ds].
Limitations of Long Form of Periodic Table
In the long form of the Periodic Table :
1. The position of hydrogen still remains uncertain.
2. The inner-transition elements do not find a place in the main body of the table. They are placed separately.
Predicting the Position of an Element in the Periodic Table
First of all write the complete electronic configuration. The principle quantum number of the valence shell represents the period of the element.
The subshell in which the last electron is filled corresponds to the block of the element.
Group of the element is predicted from the electrons present in the outermost (n) or penultimate (n -1) shell as follows:
For s-block elements;
group number = number of ns-electrons
For p-block elements;
group number = 10 + number of ns and np electrons
For d-block elements;
group number = the sum of the number of (n -1) d
and ns electrons.
For f-block elements; group number is 3. 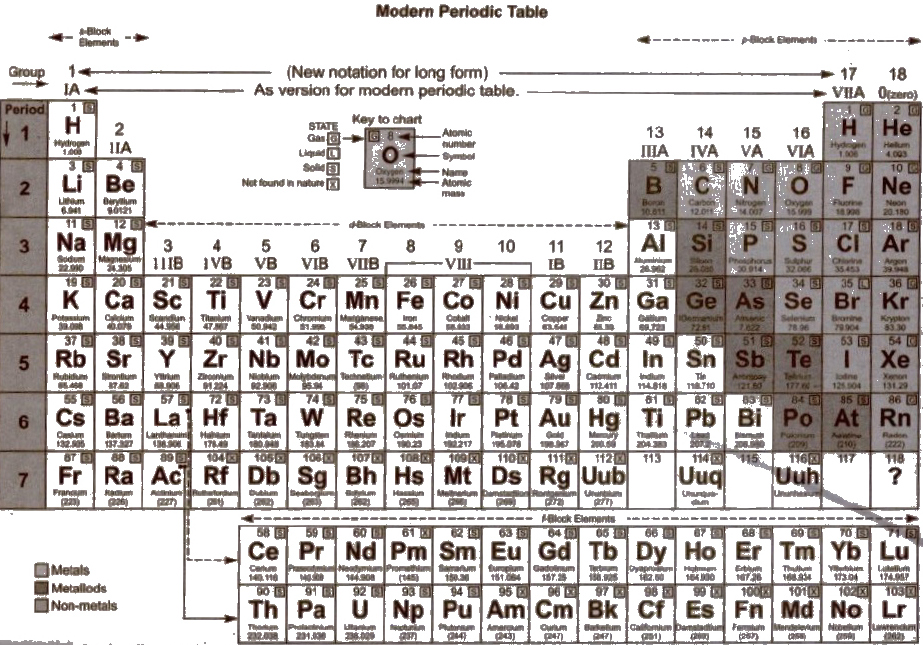 IUPAC Nomenclature of Elements With Z > 100
The names are derived directly from the atomic numbers using numerical roots for 0 and numbers from 1-9 and adding the suffix ium.

The IUPAC names and symbols of elements with Z > 100 are

Periodic Properties
The properties which are directly or indirectly related to their electronic configuration and show gradual change when we move from left to right in a period or from top to bottom in a group are called periodic properties.
Atomic Radius
It is the distance from the centre of the nucleus to the outermost shell of electrons. Covalent radius for an atom A in a molecule A2
rA = rA + rA / 2 = dA – A / 2
For heteroatomic molecule AB,
dA – B = rA + rB + 0.009 (XA – XB)
where, XA and XB are electronegativities of A and B.
In general, the atomic size decreases on moving from left to right in a period due to increase in effective nuclear charge and increases on moving from top to bottom in a group due to addition of new shells.
van der Waals’ Radius
It is defined as one-half of the distance between the nuclei of two non – bonded isolated atoms or two adjacent atoms belonging to two neighbOuring molecules of an element in the solid state.
Metallic Radius
It is define as one-half of the distance between the centres of nuclei of the two adjacent atoms in the metallic crystal.
Ionic Radius
An atom can be changed to a cation by 10RS of electrons and to an anion by gain of electrons. A cation is always smaller than the parent atom because during its formation effective nuclear charge increases and sometimes a shell may also decrease. On the other hand, the size of an anton is always larger than the parent atom because during its formation effective nuclear charge decreases.
In case of isoelectronic ions, r he higher the nuclear charge. smaller is the size. e.g., AI3 < Mg2+ < Na+ < f–< O2- < N3-
The order of radii is
covalent radius < metallic radius < van der Waals’ radius
Ionisation Enthalpy (IE)
It is the amount of energy required to remove the loosely bound electron from the isol~ted gaseous atom.
A(g) + IE → A+ (g) + e–
VarIOUS factors with which IE vanes are :
(i) Atomic size. varies inversely
(ii) Screening effect: varies inversely
(iii) Nuclear charge: varies directly
Generally left to right in periods ionisation enthalpy increases; down the group, it decreases.
IE values of inert gases are exceptionally higher due to stable configuration.
Successive ionisation enthalpies
IE3 > IE2 > IE1
IE1 of N is greater than that of oxygen due to stable half – filled 2p-orbitals.
Among transition elements of 3d-series, 24Cr and 29Cu have higher IE2due to half-filled and fully-filled stable d-orbitals
Electron Gain Enthalpy (EGE or ΔHe g)
It is the amount of energy released when an electron is added in an isolated gaseous atom. First electron gain enthalpy is negative while the other successive electron gain enthalpy will be positive due to repulsion between the electrons already present in the anion and the electron being added.

(i) Mulliken scale
Electronegativity (x) = IE + ΔHe g / 2
(ii) Pauling scale The difference in electronegativity of two atoms A and Bis given by the relationship
xB – xA = 0.18 √Δ
where, Δ = EA – B – √EA – A * EB – B
(Δ is known as resonance energy.)
EA – B, EA – A and EB – B represent bond dissociation energies of the bonds A – B, A – A and B – B respectively.
(iii) Allred and Rochow method
Electronegativity = 0.744 + 0.359 Zeff / r2
where, Zeff is the effective nuclear charge = Z – σ
where, σ is screening constant. It’s value can be determined by Slater’s rule.
Valency
Chemical Reactivity
Melting and Boiling Points
[Along a period from left to right, melting point and boiling point increases and reaches a maximum value in the middle of the period and then start decreasing].
Electropositivity or Metallic Character
Diagonal Relationship
Certain elements of 2nd period show similarity in properties with their diagonal elements in the 3rd period as shown below :

Thus, Li resembles Mg, Be resembles Al and B resembles Si. This is called diagonal relationship and is due to the reason that these pairs of elements have almost identical ionic radii and polarizing power (i.e., charge/size ratio). Elements of third period, i.e., Mg, Al and Si are known as bridge elements.