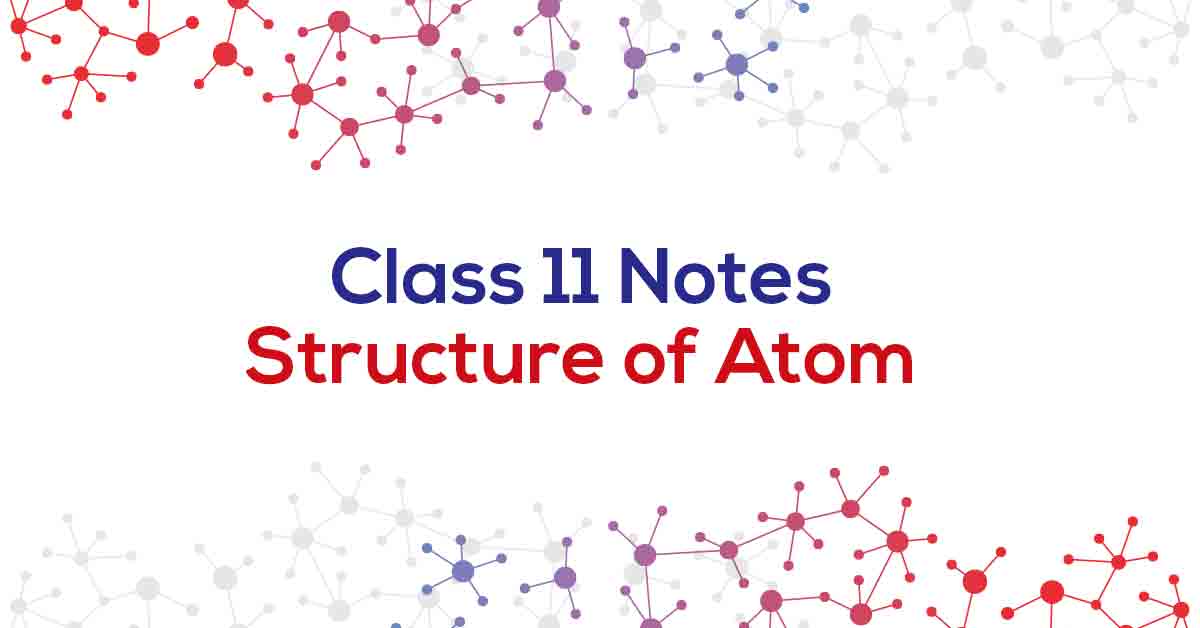 Atom
John Dalton proposed (in 1808) that atom is the smallest indivisible particle of matter. Atomic radii are of the order of 10-8cm. It contain three subatomic particles namely electrons, protons and neutrons,
Electron
Electron was discovered as a result of study of cathode rays by JJ Thomson. It was named by Stony
It carries a unit negative charge (-1.6 * 10-19 C).
Mass of electron is 9.11 * 10-31 kg and mass of one mole of electron is 0.55 mg.
Some of the characteristics of cathode rays are:
Proton
Rutherford discovered proton on the basis of anode ray experiment.
It carries a unit positive charge (+1.6 * 10-19) C).
The mass of proton is 1.007276 U.
The e / m ratio of proton is 9.58 * 10-4 C / g. (e / m ratio is maximum for hydrogen gas.)
Some of the characteristics of anode rays are :
Neutron
Neutrons are neutral particles. It was discovered by Chadwick (1932). The mass of neutron is 1.675x 10-24 g or 1.008665 amu or u.
94Be + 42He → 126C + 10n
Some Uncommon Subatomic Particles
(a) Positron Positive electron (0+1e), discovered by Dirac (1930) and Anderson (1932).
(b) Neutrino and antineutrinoParticles of small mass and no charge as stated by Fermi (1934).
(c) Meson Discovered by Yukawa (1935) and Kemmer. They are unstable particles and include pi ions [pi;+, pi;– or pi;0].
(d) Anti-proton It is negative proton produced by Segre and Weigand (1955).
Thomson’s Atomic Model
Atom is a positive sphere with a number of electrons distributed within the sphere. It is also known as plum pudding model. It explains the neutrality of an atom. This model could not explain the results of Rutherford scattering experiment.
Rutherford’s Nuclear Model of Atom
It is based upon a-particle scattering experiment. Rutherford presented that
Drawbacks of Rutherford’s Model
1. According to electromagnetic theory, when charged particles accelerated, they emit electromagnetic radiations, which CODIlE by electronic motion and thus orbit continue to shrink, so atom unstable. It doesn’t explain the stability of atom.
2. It doesn’t say anything about the electronic distribution electrons around nucleus.
Atomic Number
Atomic number of an element corresponds to the total number protons present in the nucleus or total number of electrons present the neutral atom
Mass Number
Mass number of an element
= number of protons + number of neutrons

Electromagnetic spectra may be emission or absorption spectrum on the basis of energy absorbed or emitted. An emission spectrum is obtained when a substance emits radiation after absorbing energy. An absorption spectra is obtained when a substance absorbs certain wavelengths and leave dark spaces in bright continuous spectrum.
Electromagnetic wave theory was successful in explaining the properties of light such as interference. diffraction etc., but it could not explain the following
1. Black body radiation
2. Photoelectric effect
These phenomena could be explained only if electromagnetic waves are supposed to have particle nature.
1. Black Body Radiation
If the substance being heated is a black body. the radiation emitted is called black body radiation.
2. Photoelectric Effect
It is the phenomenon in which beam of light of certain frequency falls on the surface of metal and electrons are ejected from it.
This phenomenon is known as photoelectric effect. It was first observed by Hertz.
Wo< = hvo
Wo< = hc / λmax

Threshold frequency (vo) = minimum frequency of the radiation
Work function (Wo) = required minimum energy of the radiation
E = KE + Wo
∴ 1 / 2 mv2 = h(v – vo)
[Kinetic energy of ejected electron = h(v – vo)
where; v = frequency of incident radiation
vo = threshold frequency
Particle Nature of Electromagnetic Radiation :
Planck’s Quantum Theory
Planck explain the distribution of intensity of the radiation from black body as a function of frequency or wavelength at different temperatures.
E = hv = hc / λ
where, h = Planck’s constant = 6.63 x 10-34 j-s
E = energy of photon or quantum
v = frequency of emitted radiation
If n is the number of quanta of a particular frequency and ET be total energy then Et = nhv
Bohr’s Model
Neils Bohr proposed his model in 1931. Bohr’s model is applicable only for one electron system like H, He+, Li2+ etc.
Assumptions of Bohr’s model are
1. Electrons keep revolving around the nucleus in certain fixed permissible orbits where it doesn’t gain or lose energy. These orbits are known as stationary orbits.
Number of waves in an orbit = circumstances of orbit / wavelength
2. The electrons can move only in those orbits for which the angular momentum is an integral multiple of h / 2π, i.e.,
mvr = nh / 2π
where, m = mass of electron: v = velocity of electron;
r = radius of orbit
n = number of orbit in which electrons are present
3. Energy is emitted or absorbed only when an electron Jumps from higher energy level to lower energy level and vice-versa.
ΔE = E2 – E1 = hv = hc / λ
4. The most stable state of an atom is its ground state or normal state,
From Bohr’s model, energy, velocity and radius of an electron in nth Bohr orbit are
(i) Velocity of an electron in nth Bohr orbit
(vn) = 2.165 * 106 Z / n m / s
(ii) Radius of nth Bohr orbit
(rn) = 0.53 * 10-10 n2 / Z m = 0.53 n2 / Z A 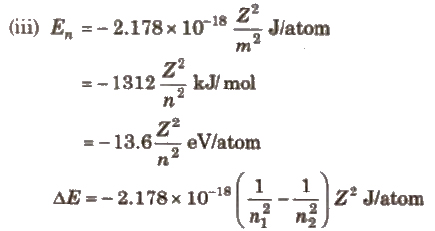 where, 11 = number of shell; Z = atomic number
As we go away from the nucleus, the energy levels come closer, i.e., with the increase in the value of n, the difference of energy between successive orbits decreases.
Thus. E2 – E1 > E3 – E2 > E4 – E3 > E5 – E4etc.
Sommerfeld Extension to Bohr’s Model
According to this theory. the angular momentum of revolving electron in all elliptical orbit is an integral multiple of h / 2π, i.e.,
mur = kh / 2π
From Bohr model, mur = nh / 2π
For K shell. n = 1,k = 1 Circular shape
L shell. n ; 2. k = 1. 2 Circular
M shell, n = 3. k = 1.2.3 Elliptical
N shell. n = 4, k =1 . 2, 3. 4 Elliptical
Emission Spectrum of Hydrogen
According to Bohr’s theory. when an electron jumps from ground states to excited state. it emits a radiation of definite frequency (or wavelength). Corresponding to the wavelength of each photon of light emitted, a bright line appears in the spectrum.
The number of spectral lines in the spectrum when the electron comes from nth level to the ground level = n(n – 1) / 2
Hydrogen spectrum consist of line spectrum. 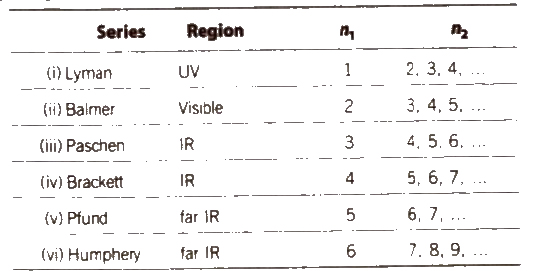 Wave number v is defined as reciprocal of the wavelength.
v = 1 / λ
v = RZ2 (1 / n21 – n22)
Here, λ = wavelength
R = Rydberg constant = 109677.8 cm-1
First line of a series is called line of longest wavelength (shortest energy) and last line of a series is the line of shortest wavelength highest energy, n2 = φ).
Limitations of Bohr’s Theory
1. It is unable to explain the spectrum of atom other than hydrogen like doublets or multielectron atoms.
2. It could not explain the ability of atom to form molecules by chemical bonds. Hence. it could not predict the shape of molecules.
3. It is not in accordance with the Heisenberg uncertainty principle and could not explain the concept of dual character of matter.
4. It is unable to explain the splitting of spectral lines in the presence of magnetic field (Zeeman effect) and electric field (Stark effect)
de-Broglie Principle
de-Broglie explains the dual nature of electron i.e.. both particle as well as wave nature.
λ = h / mv
where, λ = wavelength: v = velocity of particle; m = mass of particle
λ = h / √2m * K E
where, KE = kinetic energy.
Heisenberg’s Uncertainty Principle
According this principle, “it is impossible to specify at any give instant both the momentum and the position of subatomic particles like electron.”
Δx . ΔP ≥ h / 4π
where, Δx = uncertainty in position; Δp = uncertainty in momentum
Quantum Mechanical Model of Atom
It is the branch of chemistry which deals with dual behaviour of matter. It IS given by Werner Heisenberg and Erwin Schrodinger
Schrodinger wave equation is 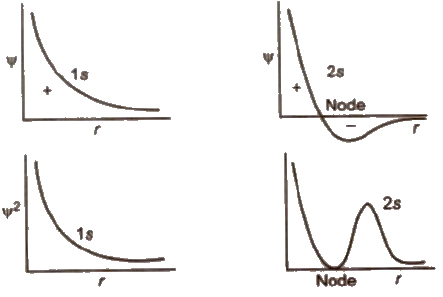 Node
A region or space, where probability of finding an electron is maximum is called a peak, while zero probability space is called node. Nodes are of two types:
(a) Radial nodes
(b) Angular nodes
(i) (n – I – 1) = radial node
(ii) (l) = angular node
(iii) (n – 1) = total + node
Number of Peaks and Nodes for Various Orbitals
Quantum Numbers
Each electron in an atom is identified in terms of four quantum numbers.
Principal Quantum Number (Niels Bohr)
It is denoted by 11. It tells us about the main shell in which electron resides. It also gives an idea about the energy of shell and average distance of the electron from the nucleus. Value of n = any integer.
Azimuthal Quantum Number (Sommerfeld)
It is denoted by I. It tells about the number of subshells (s. p, d, f) in any main shell. It also represent the angular momentum of an electron and shapes of subshells. The orbital angular momentum of an
electron = √l (l + 1) h / 2π
Value of l = 0 to n – 1.
I = 0 for s, I = 2 for d
I = 1 for P. / = 3 for f
Number of subshells in main energy level = n.
Magnetic Quantum Number (Lande)
is denoted by m. It tells about the number of orbitals and orientation of each subshell. Value of m = – l to + 1 including zero.
Number of orbitals in each subshell = ( 2l + 1)

The energy of atomic orbitals for H-atom varies as
Is < 2s = 2P < 3s 3p = 3d < 4s = 4P = 4d = 4f
Half-filled and completely filled electronic configurations are more stable Hence. outer configuration of Cr is 3d5 4s1 and Cu is 3d10 4s1.
Hund’s Rule of Maximum Multiplicity
It states.
(i) In an atom no electron pairing takes place in the p, d or ( orbital. until each orbital of the given subshell contains one electron.
(ii) The unpaired electrons present in the various orbitals of the same subshell should have parallel spins.
Methods of Writing Electronic Configuration
(i) Orbital method In this, the electrons present in respective orbitals are denoted. e.g CI(17) = 1s2, 2s2, 2 p6, 3 2, 3 p5.
(ii) Shell method In this, the number of electrons in each shell is continuously written. e.g., Cl (17) =

(iii) Box.method In this method, each orbital is denoted by a box and electrons are represented by half-headed (↑) or full-headed (↑) arrows. An orbital can occupy a maximum of two electrons.
e.g.,

Electronic Configuration of Ions
To write the electronic configuration of ions. first write the electronic configuration of neutral atom and then add (for negative charge) or remove (for positive charge) electrons in outer shell according to the nature and magnitude of charge present on the ion. e.g:
O(8) = 1s2, 2s2 2 p4
O2- (10) = 1s2, 2s2 2 p6
Effective Nuclear Charge (Slater’s rule)
In a multielectron atom. the electron of the inner-shell decrease the force of attraction exerted by the nucleus on the valence electrons. This is called shielding effect. Due to this, the nuclear charge (Z) actually present on the nucleus, reduces and is called effective nuclear charge (Zeff). It is calculated by using the formula
Zeff = Z – σ
where σ = screening constant
The magnitude of σ is determined by Slater’s rules.
Slater Rules
1. Write the electronic configuration in the following order and groups.
(ls) (2s, 2p) (3s, 3p) (3d), (4.9.4p) (4d) (4f) (5s, 5p) etc
2. Electrons of (/1 + 1) shell (shell higher than considering electrons) do not contribute in shielding i.e., σ = 0
3. All other electrons in (ns, np) group contribute σ = 0.35 each
4. All electrons of (n -1) sand p shell contribute σ = 0.85 each
5 All electrons of (n – 2) sand p shell or lower shell contribute σ = 1.00 each
6. All electrons of nd and nf orbital contribute σ = 0.35 and those of (n – 1)and f or lower orbital contribute σ = 1.00 each
e.g.. Be (4) = 1s2, 2s2