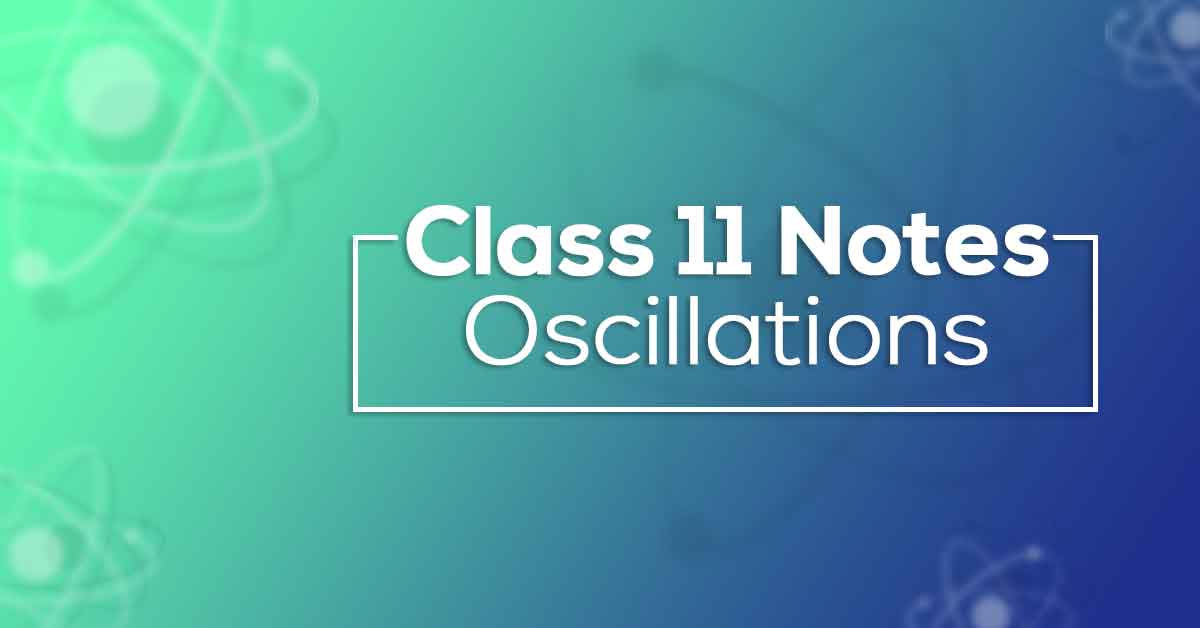 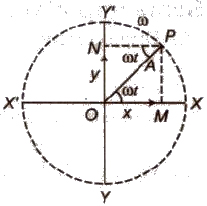 Note The acceleration is maximum at a place where the velocity is minimum and vice – versa.
For a particle executing SlIM. the phase difference between
(i) Instantaneous displacement and instantaneous velocity
= (π / 2) rad
(ii) Instantaneous velocity and instantaneous acceleration
= (π / 2) rad
(iii) Instantaneous acceleration and instantaneous displacement
= π rad
The graph between velocity and displacement for a particle executing SHM is elliptical.
Force in SHM
We know that, the acceleration of body in SlIM is α = -ω2 x
Applying the equation of motion F = ma,
We have, F = – mω2 x = -kx
Where, ω = √k / m and k = mω2 is a constant and sometimes it is called the elastic constant.
In SHM, the force is proportional and opposite to the displacement.
Energy in SHM
The kinetic energy of the particle is K = 1 / 2 mω2 (A2 – x2)
From this expression we can see that, the kinetic energy is maximum at the centre (x = 0) and zero at the extremes of oscillation (x ± A).
The potential energy of the particle is U = 1 / 2 mω2 x2
From this expression we can see that, the potential energy has a minimum value at the centre (x = 0) and increases as the particle approaches either extreme of the oscillation (x ± A).
Total energy can be obtained by adding potential and kinetic energies. Therefore,
E = K + U
= = 1 / 2 mω2 (A2 – x2) + 1 / 2 mω2 x2
= 1 / 2 mω2 A2
where A = amplitude
m = mass of particle executing SHM.
ω = angular frequency and
v = frequency
Changes of kinetic and potential energies during oscillations. 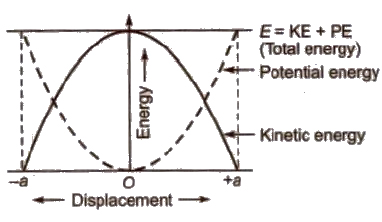 The frequency of kinetic energy or potential energy of a particle executing SHM is double than that of the frequency in SHM.
The frequency of total energy of particles executing SHM is zero as total energy in SHM remains constant at all positions.
When a particle of mass m executes SHM with a constant angular frequency (I), then time period of oscillation
T = 2π √Inertia factor / Spring factor
In general, inertia factor = m, (mass of the particle)
Spring factor = k (force constant)
How the different physical quantities (e.g., displacement, velocity, acceleration, kinetic energy etc) vary with time or displacement are listed ahead in tabular form. 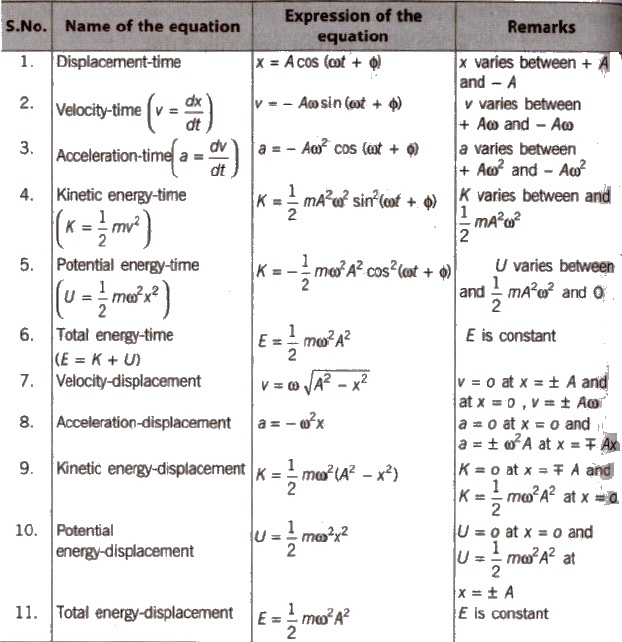 Simple Pendulum
A simple pendulum consists of a heavy point mass suspended from a rigid support by means of an elastic inextensible string.
The time period of the simple pendulum is given by :
T = 2π √l / g 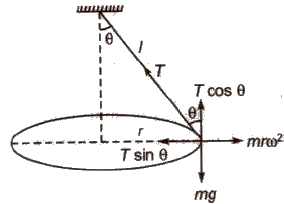 In equilibrium T sin θ = mrΩ2
Its time period T = 2π √mr / T sin θ
Compound Pendulum
Any rigid body mounted, so that it is capable of swinging in a vertical plane about some axis passing through it is called a physical or compound pendulum.
Its time period is given by
T = 2π √l / mg l
where, I = moment of inertia of the body about an axis passing through the centre of suspension,
m = mass of the body and
l = distance of centre of gravity from the centre of suspension.
Torsional Pendulum
Time period of torsional pendulum is given by
T = 2π √I / C

where, I = moment of inertia of the body about the axis of rotation and
C = restoring couple per unit twist.
Physical Pendulum
When a rigid body of any shape is capable of oscillating about an axis (mayor may not be passing through it). it constitutes a physical pendulum.
T = 2π √I / mgd 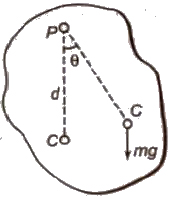 T = 2π √I / mgd = 2 π √l / g
Spring Pendulum
A point mass suspended from a massless (or light) spring constitutes a spring pendulum. If the mass is once pulled downwards so as to stretch the spring and then released. the system oscillated up and down about its mean position simple harmonically. Time period and frequency of oscillations are given by
T = 2π √m / k or v = 1 / 2π √k / m

If the spring is not light but has a definite mass ms, then it can be easily shown that period of oscillation will be
T = 2π √(m + ms / 3) / k
Oscillations of Liquid in a U – tube
If a liquid is filled up to height h in both limbs of a U-tube and now liquid is depressed upto a small distance y in one limb and then released, then liquid column in U-tube start executing SlIM.
The time period of oscillation is given by
T = 2π √h / g
Oscillations of a floating cylinder in liquid is given by
T = 2π √l / g
where I = length of the cylinder submerged in liquid in equilibrium.
Vibrations of a Loaded Spring
When a spring is compressed or stretched through a small distance y from mean position, a restoring force acts on it.
Restoring force (F) = – ky
where k = force constant of spring.
If a mass m is suspended from a spring then in equilibrium,
mg = kl
This is also called Hooke’s law.
Time period of a loaded spring is given by
T = 2π √m / k 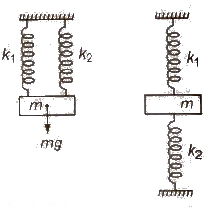