There are total of 118 element6 known so far and the discovery of new elements still continues. Every element has its own importance in the environment , some of them are useful while other are harmful. The harmful elements may also be useful in other way.

It becomes a necessity to study the chemical and physical properties of each of the elements present around us because every element is related to our life in some or other way. As the number is very large and there is possibility that more elements will be discovered, so it becomes very difficult to study each of them separately. We need to classify them in some groups according to their properties so that we can study them in group more easily and effectively. Periodic table is the tool which is used to classify the known elements in groups.

It helps us to undertake a systematic study of the various elements found in nature without which it would have been impossible for us to study all the elements in the table. With the help of periodic table a comparative study of the elements and their compounds can be done.

Dobereiner was the first scientist to classify the elements in some groups.

He tried to classify the elements with similar properties in groups of three elements (Triads). He could succeed in making only a few triads.

If the elements are arranged in order of their increasing atomic weights, every eighth element had similar properties to the first one like the first and eighth note in music. For example


The main problem with this classification was that inert gases were not discovered at that time and also all the elements could not be classified on this basis.
Mendeleef’s Periodic Table

Mendeleef’s Periodic law : The physical and chemical properties of elements are a periodic function of their atomic weights.

If the elements are arranged in order of their increasing atomic weights, after a regular interval elements with similar properties are repeated

On the basis of his law, Mendeleef proposed a periodic table for classicication of elements which is known as Mendeleef’s Periodic Table


Study of Elements: First time all known elements were classified in a group according to their similar properties. So, study of the properties of elements become easier.


Predicting new Elements: It gave encouragement to the discovery of new elements as some gaps were left in it. Sc, Ge, Tc were the elements for whom position and properties were defined by Mendeleev even before their discoveries and he left the blank spaces for them in hit table.
Blank space at atomic weight 72 in Si group was called Eka silicon and element discovered later was named Germanium.


Position of Hydrogen: Hydrogen resembles both, the alkali metals (1A) and halogens(VII A) in properties so Mendeleev could not decide where to place it.


Anomalous Pairs of Elements: There were some pair of elements which did not follow the increasing order of atomic weights. E.g: Ar and Co were placed before K and Ni respectively in the table but having higher atomic weights.


Like Elements were Placed in Different Groups: Pt and Ag which have similar properties were placed in group VIII and group IB respectively.


Anomalous Pairs of Elements: There were some pair of elements which did not follow the increasing order of atomic weights. E.g.: Ar and Co were placed before K and Ni respectively in the table but having higher atomic weights.

Refer to the following video for Modern Periodic Table

We will gain in depth knowledge of this chapter under following subtopics:


The periodicity in properties is due to repetition of similar outer shell electronic configuration at a certain regular intervals.


The table consists of 7 periods and 18 groups


Period indicates the value of ‘n’ (principal quantum number) for the outermost or valence shell.


Same number of electrons is present in the outer orbitals (that is, similar valence shell electronic configuration 
Lanthanide and actinide series containing 14 elements each are placed separately under the main periodic table. These are related to sixth and seventh periods of III group respectively.


Elements of third period from sodium (Na) to Chlorine (Cl) are called representative or typical elements.


Valency of an element in a period increases from 1 to 7 with respect to oxygen.

From left to right in a period generally


Diagonal relationship — Elements of second period Li, Be and B resemble closely with the elements Mg, Al and Si of third period in the next higher group.

Second Period Li Be B C


There are nine groups in modern periodic table and they are represented by roman numerals as I, II, III, IV, V, Vi, VII, VIII and zero.


Groups I to VII are further divided into two subgroups A and B, Group VIII consists of three sets, each one containing three elements.


Inert gases or noble gases are placed in zero group.


The valency of an element in a group is equal to the group number.


Ionisation potential, electron affinity and electronegativity of elements decreases down the group.
Classification of Elements 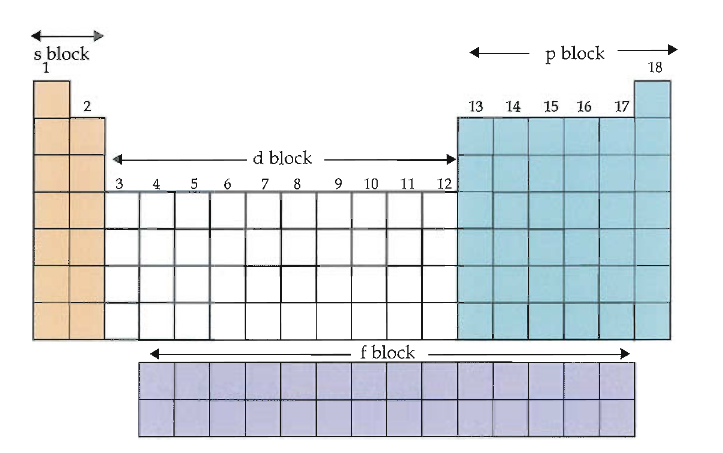 On the basis of electronic configuration, the elements may be divided into four groups.
s-block elements
These are the elements in which last electron enters s subshell.


These are present in the left part of the periodic table.


These include 1 and 2 group elements.


All the s- block elements are metals.


These are the elements in which last electron enters p subshell.


These are present in the right part of the periodic table.


Most of the p block elements are metalloids and non metals but some of them are metals also.


These are the elements in which last electron enters d-subshell.


d block elements include group 3 to 12 groups of the periodic table.


All are d block elements are metals.


These are placed separately below the main periodic table.


These are mainly related to IIIB i.e. group 3 of the periodic table


There are two series of f-block elements as under