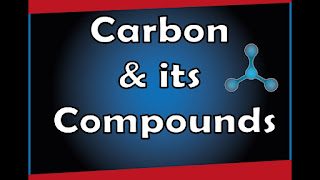 
Ans. Covalency is defined as the number of electrons shared by an atom.


Ans. A bond formed by the sharing of electrons is called covalent bond.

Ans. A functional group is an atom or a group of atoms that characterizes the chemical properties of an organic compound.


Ans. The branch of chemistry that deals with study of compounds of carbon except for oxides of carbon, carbonate and hydrogen carbonate salts is called organic chemistry.


Ans. These are the compunds of carbon and hydrogen are called hydrocarbon.


Q. 7. What are saturated carbon compounds ?


Ans. The compunds of carbon in which carbon-carbon atoms are linked by single covalent bond are called saturated carbon atoms; Alkanes.


Q. 8. What are unsaturated carbon compunds ?


Ans. The compounds of carbon in which carbon-carbon atoms are linked by multiple bonds i.e. double or triple bonds are called unsaturatedcarbon compounds, e.g : Alkenes or Alkynes.

Ans. The phenomena by virtue of which an element can exist in two or more than two forms having similar chemical properties but different physical properties is called allotropy.

Ans. Vivegar is 5–8% solution of acetic acid in water.

Ans. It is the process of burning of a substance in the presence of oxygen to produce carbon dioxide along with heat and light.Combustion reactions are also called oxidation reactions.

Ans. It is the process of formation of ester by the reaction between an alcohol and an acid is called esterification. e.g. : Reaction between ethanol and ethanoic acid in presence of conc. H2SO4.


Ans. It is the alkaline hydrolysis of esters to give back the carboxylic acid and alcohol. As it is used in the prepation of soap, it is called saponification.


6. How can you differentiate saturated and unsaturated Hydrocarbon on the basis of burning behaviour ?

Ans. On burning, saturated hydrocarbons give a clean flame whereas unsaturated Hydrocarbons on heating give a yellow flame with lots of black smoke.

Ans. (1) Alcohol causes addiction and makes person dependent on it.

(2) If consumed in large quantities, it may cause death by damaging liver.


8. What is denatured alcohol ?

Ans. Alcohol which is made unfit for the drinking purposes is called denatured alcohol. It is ethyl alcohol (C2H5OH) mixed with poisonous substances like methanol, copper sulphate, etc.


9. Give two advantages of synthetic detergents over soaps ?

(2) Synthetic detergents are more soluble and have better cleansing action than soaps.


10. What are substitution reactions ?

Ans. It is a type of reaction in which a chemical reagent (substituent) displaces the another atom or group (leaving group) in a compound, e.g., Substitution of Hydrogen of Methane by chlorine


1. Differentiate between diamond and graphite.

2. Each carbon in diamond is bonded to four other carbon atoms.

3. No free electron is left.

4. It is a bad conductor of electricity.

2. Each carbon atom in graphite is bonded to three other carbon carbon atoms.

3. Each carbon has one free electron with it.

4. It is a good conductor of electricity.

5. It is soft and slippery.


2. How is combustion different from pyrolysis ?


Ans. Combustion means heating a compound in the presence of excess or limited supply of air, e.g., combustion of methane gives carbon dioxide and water.

Pyrolysis means the decomposition of a hydrocarbon into its element on strong heating in the absence of air, e.g. : Pyrolysis of methane gives carbon and hydrogen.


3.Discuss the method of preparation of soap in the laboratory.


Ans. In laboratory, soap is prepared by heating of equal volumes of castor oil and concentrated sodium hydroxide solution taken in a beaker. A paste of soap is formed by constant stirring during heating. Most of the soap separates out but some of it remains dissolved in solution. NaCl is then added to precipated out all the soap from equeous solution. On cooling the solution, solid soap separates out.

Glycerol is obtained as a byproduct in this process.


Ans. (1) Alcohol is an intoxicant and its drinking result lose in the sense of discrimination.

(2) It ruins the health of the person by damaging liver and making his brain dull.

(3) Alcohol drinking by the head of a family worsens the economic condition of the family.

(4) The alcohol drinking by the head of a family has very bad effect on the psychological development of the children.


5. Differentiate between soaps and synthetic Detergents.


1. They are the sodium salts of the long chain carboxylic acids. The ionic group in soaps is – COO Na

3. Soaps are prepared from animal fats or vegtable oils.

4. They are not suitable for washing clothes in Hard water.

3. Synthetic detergents are prepared from the hydrocarbons.

4. Synthetic detergents can be used for washing clothes even in Hard Water.

2. In these compounds the ions of opposite charge are held together by strong electrostatic forces of attraction.

3. They have high melting and boiling points.

4. These conduct electricity in solution or in molten state.

2. In these compounds the molecules are held together by weak attractive forces.

3. They have low melting and boiling points.

4. These are largely non-conductor.


7. Give some important properties of ethanol (ethyl alcohol).

(2) It is a colourless liquid at room temperature.

(5) It is one of the main components of alcoholic drinks.

(8) It burns with blue flame in the presence of O2 of air. This combustion is an oxidation process.

8. Give five main advantages of synthetic detergents over soaps.


Ans. Following are the advantages of synthetic detergents :

2. Synthetic detergents have a stronger cleansing action than soaps.

3. Synthetic detegents are more soluble in water than soaps.

4. Synthetic detergents are prepeard from the hydrocarbons white soaps are prepared from from animal fat or vegetable oil which leads to their deficiency for human consumption.

5. Synthetic detergents can be used even in acidic solution but not the soaps.


9. Write important uses of (a) ethanol and (b) ethanoic acid.

(3) It is used for making some medicines like cough syrups, tincture iodine and some tonics.

(4) It is used for making antifreeze material for cooling engines of vehicles.


(1) Dil. solution of ethanoic acid (acidic acid) in water is called vinegar, which is used as a preservative of pickles.

(2) It is used as a useful reagent in the chemical laboratories.

(3) It is used for making many C– compounds.

(4) It is used for making esters which are used as flavouring agents and perfumes.


10. What happens when ethanol reacts with (i) sodium (ii) potassium permanganate solution.