Carbon and it's compounds

Carbon and its compounds

– Covalently bonded molecules have low melting and boiling points .
–comparatively weaker intermolecular forces, unlike ionic compounds.
– These molecules are generally poor conductor of electricity since no charged particles are formed.

1. CATENATION is property of carbon atom to form bond with other atoms of carbon. Like carbon, silicon forms compounds with hydrogen upto seven or eight atoms of silicon called silanes.

2.TETRA VALENCY : Having a valency of 4, carbon atom is capable of bonding with atoms of oxygen, hydrogen, nitrogen, sulphur, chlorine and other elements. Since it requires four electrons, carbon is said to be tetravalent.
The smaller size of carbon atom enables nucleus to hold the shared pair of electrons strongly, thus carbon compounds are very stable in general.

HYDROCARBONS:  The compounds which are majorly made of hydrogen and carbon atoms.Hydrocarbons are further classified as

Saturated Compounds : Saturated compounds are hydrocarbons in which hydrogen and carbon have single bonds. They are also known as Alkanes.
ALKANE :

A part from branched structures, carbon compounds are present in cyclic form. Example: Electron Dot structure :Lewis structures (\electron dot structures) are diagrams that show the bonding between atoms of a molecule and the lone pairs of electrons that may exist in the molecule.

Steps to draw a Lewis structure :
1. Decide how many valence (outer shell) electrons are possessed by each atom in the molecule.
2.If there is more than one atom type in the molecule, put the most metallic or least electronegative atom in the center. Recall that electro-negativity decreases as atom moves further away from fluorine on the periodic chart.
3.Arrange the electrons so that each atom contributes one electron to a single bond between each atom.
4.Count the electrons around each atom: are the octets complete? If so, your Lewis dot structure is complete.
5. If the octets are incomplete, and more electrons remain to be shared, move one electron per bond per atom to make another bond. Note that in some structures there will be open octets (example: the B of BF3), or atoms which have ten electrons (example: the S of SF5)
6. Repeat steps 4 and 5 as needed until all octets are full.
7. Redraw the dots so that electrons on any given atom are in pairs wherever possible.

Formulae and Structures of Saturated Compounds of Carbon and Hydrogen

On the basis of structures the hydrocarbons can be:


Structural isomers : These are the compounds having identical molecular formula but different structures. For example, isomers of butane.

NOMENCLATURE : Nomenclature is the system of assignment of names given to organic compounds.

How to name carbon compounds : NOMENCLATURE

1. Identify the number of carbon atoms in the compound.

2. Functional group is indicated either by prefix or suffix.

Hydrogen is added to unsaturated hydrocarbon in presence of palladium or nickel as catalyst.

In saturated hydrocarbons, the hydrogen attached to carbon can be replaced by another atom or group of atoms in presence of sunlight.

Hydrolysis On heating with an acid or a base the ester forms back the original alcohol and carboxylic acid. 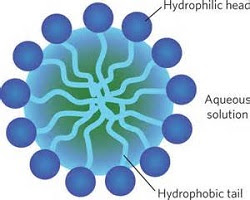 Structure of a Soap molecule

Most dirt is oily in nature and the hydrophobic end attaches itself with dirt, while the ionic end is surrounded with molecules of water. This result in formation of a radial structure called micelles. 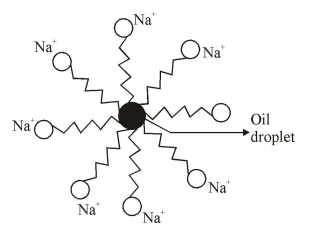 Scum : The magnesium and calcium salts present in hard water reacts with soap molecule to form insoluble products called scum, thus obstructing the cleansing action. Use of detergents overcome this problem as the detergent molecule prevents the formation of insoluble product and thus clothes get cleaned.